“You wanna know why I’m getting out of the game?”

“It’s because I have to work with millennials.”

And that got my attention. This guy should be getting out of the game because he’s like 150 years old or because he’s got butt cancer. Those are reasonable explanations for why someone would retire.

But millennials? That’s some next level, Gran Torino, get off my lawn, angry old man talk.

This was surprising even though I already knew this guy was a finalist to win the title of World’s Grumpiest Pediatrician (He’s one of the owners of the medical office building for which I am comptroller.¹)

“These millennials, they’re all about convenience.” Turns out he was talking more about his patients than about his staff or colleagues. “Five miles is too far for millennials to drive to bring their sick kids to see me. They’d rather take them to an urgent care that’s closer.”

He said he’s losing all the easy office visits to telemedicine; that’s where you Skype with some rando doctor instead of going to an actual office. “If someone’s got an earache,” he continued, “you don’t know if it’s an ear infection or a bug in their ear.” Which made me think of nothing except how badly I wanted to hear this guy’s stories about pulling bugs out of kids’ ears. 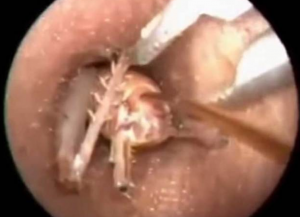 So easy problems are going to telemedicine providers, and the ubiquity of urgent care centers is cutting him off geographically. So he’s left with the difficult, time consuming cases with patients who happen to live close. But to insurance companies, an office visit is an office visit; the amount they pay is the same regardless of the difficulty of said office visit.

He went on to show me pictures that a parent had texted him of a kid with a weird rash.² First off, he had no idea how they got his cell phone number. Second, they wanted him to diagnose the problem and prescribe a solution based off two pictures. Again, he said patients underestimate the value of face-to-face visits for proper diagnosis. And I still wanted to see pictures of kids with bugs laying eggs in their ears. No luck.

And finally, he went off about how 50 percent of primary care physicians are over 55 years old, most of whom will be retiring in the next five years. “And,” he said, “You can’t find any good millennial doctors to replace them. These new doctors want to work from nine to five, four days a week, and they want to know all their days off for the next 12 months. They’re entitled and they don’t want to work.”

And that’s why he’s throwing in the towel: f***ing millennials.

I didn’t tell him, but his BS was so easy to smell.

First off the “character flaws” he enumerated weren’t millennial traits. They’re human traits. Not only that, they are HIS traits. Millennials are all about convenience? They’re entitled? Absolutely. We all are. Everybody wants convenience, and anybody whose skills are in high demand should demand a better schedule from their employer.

Not only that, but this guy, who is complaining about others demanding convenience, is himself demanding the convenience of patients coming to him, and he feels entitled that the medical profession not change from what he’s grown familiar and comfortable with.

At first, I was thinking that this guy was weak for bailing, caving because things are changing in his profession. But then I realized that he’s making a solid decision based on his preferences. Because really, when your environment is changing, you should either embrace the change and get out in front of it, or you should get out of the kitchen. The worst decision is to stay in the kitchen and bitch about how you don’t like the kitchen anymore.

And it’s the same in accounting. Millennial business owners don’t want to interact with their accountants in the same way that boomers or gen-xers became comfortable with. They don’t really want to go to the trouble of coming to your office (but be real, nobody does), and traditional accounting services aren’t that valuable to them (again, nobody’s psyched to pay for you to review their financial statements).

So either serve the customers they way they demand to be served, or get out of the game.

Also, millennial employees want flexible schedules, they want to telecommute when it makes sense, and they want to feel like their work is making a difference.³ But there’s a shortage of qualified accounting staff in the world today. So you get to either make the necessary changes from what you’re familiar with to what the next generation of workers wants, or close up shop. (Actually since their supply is low and demand is high, they passively demand these working conditions by choosing to work only for companies who understand what they want and catering to it.)

So either adjust to the changing demands of the workforce, or get comfortable with not growing.

And please send me pictures of kids with bugs in their ears.

¹That’s right. I’m a comptroller, βi+¢#es.
²Pretty sure that was a HIPAA violation.
³ Surprise. We all do.

Greg was born in Akron, Ohio, in the shadow of the Firestone tire factory. He began to swim competitively when he was eight, swimming for the Mountlake Terrace Lemmings. He graduated in 1995 from the University of Washington with a math degree. He chose math for the ladies. After serving ten-years as an 8th grade math teacher, he decided it was time for a career change, mainly because he “couldn’t stand those little bastards.” He began his accounting career with a local CPA firm in Orem, Utah, where he consistently failed the QuickBooks ProAdvisor advanced certification exam. Greg currently works as the Controller for the Utah Valley Physicians Plaza. He lives in Utah. He enjoys eating maple bars, drinking Diet Pepsi, and swearing.