The Best CPE Is When Everything Goes Horribly Wrong

I’ve known Jason for six years now. I’ve heard all of his stories, the ones about how he’s tried all the stuff that you know you should try at your firm. He’s got a drive to blow crap up, and so he blows crap up, and he learns tons and tons of crap because of the crap he blows up.

Thriveal is accounting for the brave, and brave accountants risk the possibility of blowing crap up. Intentionally taking risks whereby crap may be blown up is something that can be managed; planned risks can be controlled and contained more or less. 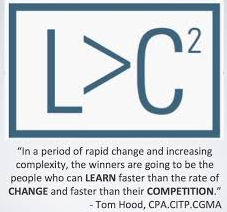 The idea that crises intensify and accelerate learning became acutely clear to me about three months ago when my sweet-ass 1973 Bronco literally blew up.¹

It was late August, shortly after dark, and I had just gotten home from Walmart.² I pulled into my parking spot like always, put the Bronco in park like always, and turned the key like always.

What didn’t happen was the truck didn’t turn off like always.

Now it’s a 43-year-old vehicle, so maybe when I say “it didn’t turn off” you’re thinking it was sputtering out and taking a long time to turn off. But you’re wrong. When I turned the key it continued running as if I’d never turned the key.

When you’re faced with a new problem because Plan A never doesn’t work (hence no Plan B), you instinctively just try Plan A again. So I very deliberately turned the key back to the ON position and then returned it to the OFF position. As if the Bronco was just distracted and would be like, “Oh, dude, sorry. I was checking out that Mazda Miata across the street. Didn’t notice you turned the key. But now that you’ve gotten my attention, I’ll shut off, as per usual.” Plan A Try 2 did not work.

I guess there was kind of a Plan B. I could just let the Bronco keep running until it ran out of gas. And you’re right, that’s a horrible plan because the Bronco has a 23-gallon tank and I’d just filled it up, so it would take six or ten hours of idling, and then I’d have a Bronco that wouldn’t start or shut off.

So like a competent citizen of the 21st century, I Googled, “My car won’t turn off,” because Google knows all. Google almost knows all. What Google apparently doesn’t know is that I’m an idiot. It told me I needed to disconnect a cable coming off of the alternator; however, I don’t know what a &#%ing alternator is. I could maybe pick one out of a lineup, but it was dark and maybe I couldn’t pick one out of a lineup. 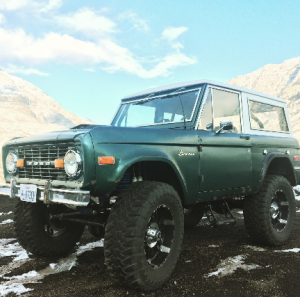 But it was worth a shot, so I popped the hood, and I started looking around despite the fact that I didn’t know what I was looking for. No luck. What I did notice, however, was some steam coming out of the radiator’s overflow reservoir. Probably nothing.

Nope. Probably something. The longer I looked under the hood with a stupid, vacant look like someone asked me to recite the lyrics to a Jethro Tull song, the more steam started to spray out, and not just from the overflow reservoir. It also started coming out of other various hoses and mechanical dealies.

So now, I had a compound problem: I had a car that wouldn’t shut off AND it was overheating. Suddenly it wasn’t just a problem. It was an urgent problem.

So I called Joe, and he said, “No problem, just unplug the center cable coming out of your distributor cap.”

“Sounds easy,” I replied, “but unfortunately I have no damn clue what a distributor cap is.”

Very patiently he explained, “It’s round and has a bunch of cables that go to your spark plugs. Unplug the middle cable.”

I saw what he was describing, and I started reaching for it when he said, “Now, there can be a pretty good electrical current running through it, so you should put some gloves on first.”

“Cool! Thanks, Joe! Gotta run get gloves! I’ll call you back if I don’t die!” I shouted at Joe over the hissing and spewing of the Bronco that I figured I’d just destroyed.

So I ran to the garage, grabbed a pair of gloves, raced back to the Bronco, and tugged off the center plug from what I assumed was the distributor cap.

And the Bronco immediately turned off! IT TURNED OFF!!! Hell yes! I did a car thing!

Never mind that it took another 30 minutes for the engine to cool down to the point where I could open the radiator cap, which still spewed antifreeze all over me. And never mind that I was still worried that the overheating probably cracked the internal combustionizer. But the problem was solved.

The entire situation took less than 15 minutes, and in that 15 minutes, I learned SO MUCH. I learned how to identify a distributor cap. I learned that it could kill me but not if I’m wearing gloves. I learned that my Bronco has electric fans to cool the radiator, not a mechanical fan that runs whenever the engine is running. I learned what an alternator is (just in case I need Google’s help in the future). I learned how easy it is to pop a radiator hose back on. And now I have a comprehensive Plan B for when my car won’t shut off.

While I was standing there waiting for the engine to cool down, it struck me — not just how much I learned in a compressed amount of time, but also that I would never forget it. Crises have a special way of searing new knowledge into your brain.

So this busy season, when things unintentionally blow up, don’t see it as the universe conspiring against you.³ See it as the universe sending you to graduate school for free. And if you’ve created a work environment at your firm where nothing ever blows up, you’re probably playing it too safe.

Take risks, create broad safety nets, have a Joe, recognize the opportunity to learn, and enjoy the ride.

¹Okay, not literally. Just keep reading.
²Yeah, I shop at Walmart. Because I like to be able to buy underpants and Skil saw blades at the same place.
³It is.