One Way You Should Be Like Donald Trump. Only One.

I have some regrets in life. One regret is that I never bought a Herman Cain for president t-shirt.
Not that I ever supported Herman Cain. I just thought it would be funny to wear a shirt supporting a goofy dude who said some weird stuff, who was leading the polls and whose campaign suddenly and comically self destructed.

So this campaign season I was determined to not make the same mistake. Because like they say: Fool me once, shame on you. Fool me twice, shame on Trump.

So in July 2015, when the Trump Dumpster was just starting to smolder, I figured it was time to get me a Donald Trump for president t-shirt before he said something crazy and got booted out of the race. About that same time, I visited my dad in Sacramento, and on that trip I met a real live Trump supporter. He was my dad.

I think being a Trump supporter today is like how it must’ve been to be gay in the ‘80s. Nobody knew unless they saw you at a rally.¹

With the knowledge that my dad was a Trump supporter, it started to dawn on me that I may never be able to wear a Trump for president t-shirt ironically. Or rather, I could wear it ironically, but no one would know that I was wearing it ironically because (A) during the primaries, people would assume that I actually supported him, (B) if he lost in the primaries, people would assume that I was mad about the Republican nominee, and (C) after the election the t-shirt would be the clothing equivalent of a “Don’t blame me, I voted for the other guy” bumper sticker. 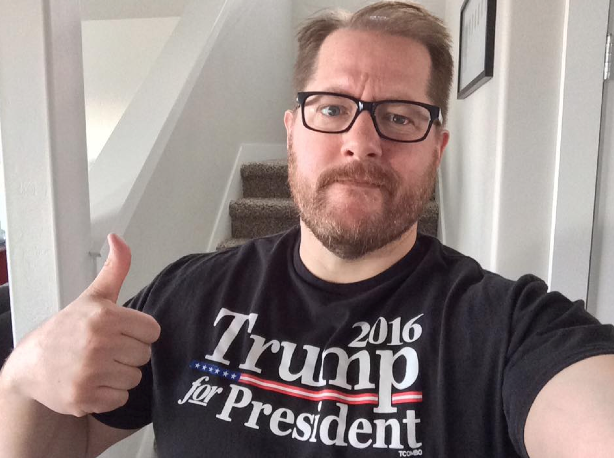 That shirt hung in my closet unused for three months, and then the day came when I could wear it with semi-confidence: April Fools Day.

I wore it to work, and most people didn’t get it. I felt like I could read their minds, and they were thinking, “I didn’t know Greg was one of those.”

Finally, in the mid-afternoon when I was walking into the men’s room and some lady was coming out of the women’s room, she said, “I like your shirt.” And I was like, “April Fool’s, you stupid bitch!”3 It was a good one. Trust me.

Later, after spending about a half hour with a customer, he meekly asked me, “Is that shirt an April Fool’s thing?” Then I elbowed him in the face and said, “You’re the problem with our country!”³ Only later did I say, “April Fool’s.” I was committed to the bit.³

But now here we are, and Donald Trump is the Republican nominee. And for the purpose of this post, I don’t care what you think about him politically. Instead, try to ignore your bias, and think about this: In a way, he’s working this election perfectly, and (he says, choking back a little barf) we should try to be like Trump.

You see, Donald Trump is being Donald Trump regardless of the consequences. And if he is elected president, we know exactly what we’re getting. It’s like he’s got IBS, and he’s farting on the first date.

Hillary Clinton is doing the opposite. Instead of Clinton being Clinton, Clinton appears willing to become whatever you want her to be to become president.

Establishment Republicans don’t want Trump to be Trump. Instead they want him to be “presidential,” but Donald refuses. Although he says, “being presidential is easy,” Trump’s going to be Trump, and Trump isn’t presidential.

But what’s remarkable is this: He’s creating a situation where, if he get’s the job, it’s on his terms. And conversely, it appears that if he can’t get the job on his terms, he doesn’t want the job.

Because when we do that, we find ourselves in an amazing place: working to our strengths, not having to hide anything, and working authentically. Don’t hide your weaknesses because once they are displayed to a potential client, if they hire you, they’re implicitly saying that your weaknesses are inconsequential to your efficaciousness for the job at hand.

It’s a huge risk to present yourself without hiding your flaws, without pivoting to please a potential client or employer (or voter). But when you construct your professional universe in a manner where you get to be yourself, where every day you’re comfortable in your own skin, you’ve come a long way toward living the dream.

I know, politics is a gross place to find a good example of how to operate. But you get it.

¹I’m so sorry. My intent was not to offend anyone who was gay in the ‘80s.
²Thanks, sister-in-law!
³Unfortunately, not a true story.