Professional Bedside Manner: Is Yours Better Than My Tattoo Artist’s?

For years I’ve considered getting a tattoo. Considered, but I’ve never pulled the trigger. I couldn’t decide what to get. A barbed wire armband? Too generic. A lower back tattoo of the entire text of 1 Corinthians 13? Too preachy.

My tattoo-related indecision ended in November.

You see, my wife and I had a really hard 2015, but “really hard” is actually way too mild. Last year ripped our hearts up. Our marriage basically ended. We were separated for about seven months. By the end of October it was do or die time — I had to decide if I was in or if I was out — I had to shit or get off the pot. And it took the pending reality of having to get off the pot that made me realize how badly I wanted to shit. So I started to shit. I started to shit real hard. Because I knew I had to shit hard in order to be able to stay on the pot.

That was a gigantic turning point for me in our marriage. And in the midst of turning that corner, I wanted to find a way to express my love for and commitment to Laura.

So I decided to get my wife’s name tattooed over my heart.

(Writing this post is kind of strange. Our marriage problems were very serious and very personal, and this post is anything but private or personal. The tattoo was also a very serious, private, and personal decision; and I have a lot of friends and family who don’t know about it yet. This post is basically my tattoo coming-out in addition to a rather public self-depantsing about my relationship with my wife. She deserves a lot of credit for her patience, love and longsuffering.)

At this point I needed to get a tattoo. The problem was (1) I wanted my tattoo to kick ass, and (2) I had no idea about the tattoo design and installation process. Fortunately I have a comedian buddy who’s covered in tattoos. I asked him where to go. He suggested Cathedral Tattoo in downtown Salt Lake City. I also asked my hairstylist, Twix¹, and Cathedral was on his short list, too.

Now I live in Provo, about 45 minutes south of Salt Lake City, and there are a few tattoo parlors in Provo. But I didn’t care about the convenience. I wanted my love tattoo to be great, not convenient.

I also didn’t give a single rat’s ass about the price. In fact, I wanted an expensive tattoo, because price signals quality.

Now listen, accountants. Most people feel the same way about accounting services as I did about tattoo services: quality trumps cheap or convenient. In fact, if you find a customer who wants cheap and convenient more that quality, you don’t really want that customer.

My appointment at Cathedral was scheduled for the day before Thanksgiving. I showed up and was introduced to Mina, the lady who was going to do my tattoo.²

I told her what I wanted, and gave her an example of some tattoo-like stylized lettering that I found online.

She went to her office to draw up an idea of what she thought I wanted. After a few minutes she came back, showed me her creation and asked what I thought.

I said, “I’d like the letters to be a bit thicker.”

“No you don’t,” she replied. WTF?! You met me ten minutes ago, and now you think you know me?! She continued, “Once they’re filled in, they’ll look bolder.”

Try to realize what just happened. It took me years to decide to get a tattoo, and I finally decided to get one because I had a clear idea of what I wanted. I spent a decent amount of time searching for the right font. And, AND, this tattoo is going to be a prominent feature on my body for the rest of my life. And now this stranger who looks half my age is telling me that I don’t want what I want?

But then I thought about it for a second. This stranger who looks half my age is an expert. She’s an artist. She’s invested in her work. As an artist she wants all of her tattoos — every one — to kick ass. She’s made mistakes in the past, and she’s seen her customers make mistakes. And neither of us want this tattoo to be a mistake.

So I decided to defer to her expertise. It scared the crap out of me, and it was a little humbling, but I deferred.

I was still thinking about her self-interest in the quality of her work later while she was giving me the tattoo, and asked her if she ever refused to do work. She said, “Well, I won’t do penis tattoos.” Wait. What?! And she said it in a way that also seemed to communicate, “I know that’s what you were really asking, perv.” No. That’s not what I was asking, Mina. I just wanted to know if stupid people came in with stupid ideas, and your integrity as an artist precluded you from being associated with stupid things.

But, lacking better judgment, I jumped right into the wang tattoo topic by giving this brilliant observation: “I don’t even know how that would work. Would you have to take like a handful of Viagra beforehand?” Pro tip: if you don’t want your tattoo artist to think you’re a perv, don’t ask her about the mechanics of applying a penis tattoo.³

Now remember, this exchange happened in the middle of getting my tattoo, and getting a tattoo hurts like hell. People told me it hurts like hell, so I expected pain. I assumed it would hurt like getting your back waxed (done it) or like laser hair removal (done it), but I was wrong. When she started the tattoo it felt like she was dragging a nail along my skin, and by the end, it felt like she was carving my sternum with a pocket knife. So I’ll blame my lack of conversation discernment on the fact that my body was going into a state of shock. 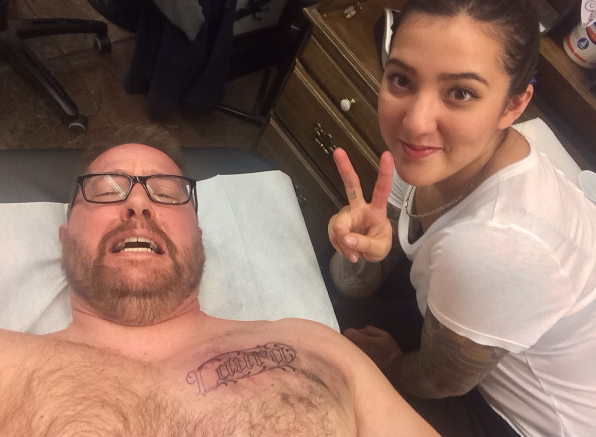 So rewind back to the pre-excruciating-pain part of the story. I decided to go with her suggestion regarding the thickness of the lettering, and I wanted the tattoo to be about six inches long. Her drawing was closer to ten inches, so she went back to resize it (apparently Mina had no professional problems with the size) and put it on this weird paper that transfers her drawing onto my skin.

Once she came back, she asked me to show her exactly where I wanted it placed, and I showed her that I wanted it on my chest, on the left, over my heart. And she said, “How about I put it where I think it will look good. If you don’t like it, we can move it.” Really?

I dug my heels in. I told her no. I knew where I wanted it. I knew the symbolism I was after. It needed to be on the inside. My body. My money. My tattoo. Do what I want you to do. And she did. 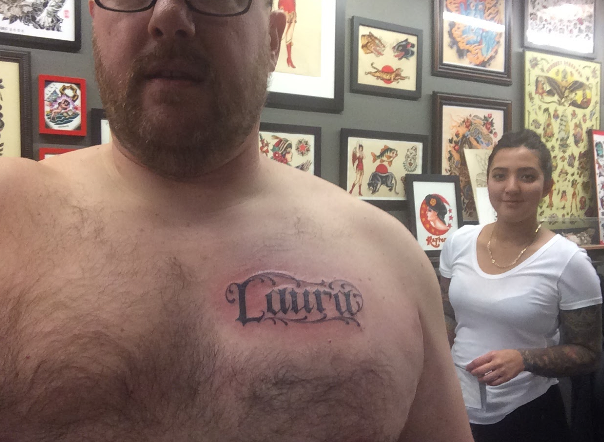 Mina’s assertiveness throughout this process got me thinking about how we as accountants serve our customers — about our bedside manner. Mina was a pro. She was working quickly and effectively through the process of giving me a tattoo. But it was clear that over time, from both giving and getting tattoos, and from simply being immersed in the tattoo world, she had forgotten how big of a deal getting a tattoo is, especially the first-time tattooee.

We accountants often have same attitude toward accounting, especially with new customers. We want to work quickly and effectively to complete our work. We’ve been immersed in the accounting world for years. The basics of tax and GAAP are boring to us. But the best of us remember to slow down and communicate the rationale behind decisions that seem simple or obvious to us. The best of us remember that our bedside manner is a key component in customer experience.

Remember, we’re working with someone else’s money — their business, their retirement, their life. What we do is a big deal. NO ONE chooses their accountant lightly, and they expect you to not handle their accounting lightly.

But they’re also paying for expertise. I needed Mina’s expertise. That’s why I chose Cathedral Tattoo. Your customers need your expertise, and they did their homework — on you and on your competition. So (like Mina) you need to speak up when a client wants to do something that you believe is suboptimal. But don’t be dismissive (like Mina). If a client is asking you to do things in a specific way, they have a reason. Take the time to figure out that reason, see if there’s any validity to it, and walk them through your thought process, but do it at their pace.

And above all, don’t bring up the mechanics of penis tattoos.

¹Yes. I have a hairstylist, and his name is Twix. Read the post.

²Turns out, a female tattoo artist is called a “Tatooine.”

³She said, “You don’t have to be … umm … aroused … while you’re getting a tattoo there.” I still don’t get it. Everyone knows you don’t draw a picture on a balloon before you blow it up.