Being More Productive By Screwing Off

I was browsing HBR’s Twitter feed, trolling for some blog post inspiration. But what actually happened was simultaneous inspiration and kind of wanting to barf.
I found an article called “Zoning Out Can Make You More Productive.” 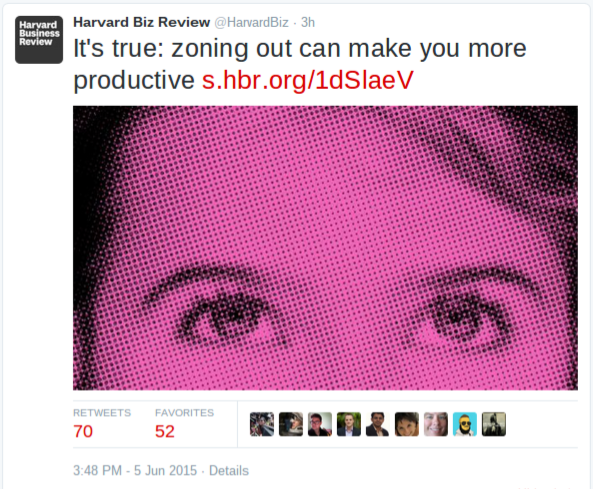 I space out all the time, and apparently, it makes me awesome.

“Research published in the journal Psychological Science shows that we engage in what the researchers call ‘creative incubation’ during mind-wandering. If we’re facing a challenge that needs some new ideas, we are more likely to find good solutions if we let our minds wander and then come back to the challenge.”

To summarize the entire article, Harvard thinks I should get a raise.

But then my old man brain kicked in, and I found myself calling BS. Because zoning out is involuntary, right? No one’s ever said, “I’m facing a huge creative challenge. I know. I’ll override the inherent anxiety of the situation, and I’ll stop working and zone out. That way, I’m sure to come up with a high-quality creative solution.” Barf.

But this article got me thinking about the book The Happiness Advantage. The whole idea of that book is that success doesn’t lead to happiness, but rather happy people are more likely to be successful.

The most successful people, instead of turning inward, they actually hold tighter to their social support. Not only are these people happier, but they are more productive, engaged, energetic, and resilient. They know that their social relationships are the single greatest investment they can make in the Happiness Advantage.

Video games can improve attention span and information processing skills, even (according to one study) your confidence and social skills.

What the hell is going on? According to the first hit on a quick Google search, recent brain research proves that play makes us more productive.

All this feel-good, group-hug, Wu Wei bullcrap tells me that if I space out, hang out, and goof off, I’m Richard Branson. That’s the opposite of a work ethic. That’s a not-work un-ethic.

But what the eff is our amazing work ethic helping us work toward? What’s the reward for our nose-to-the-grindstone diligence? Isn’t it supposed to be rewarded with great friends, and goofing off, and enough time and freedom to be able to sit and space out sometimes?