I have to admit: I’d love to learn how to surf. I sorta imagine it’d be something like skateboarding (which I’ve tried a couple times, and happy to report no major accidents) or like snowboarding (which I haven’t tried yet, but maybe soon). Surfing involves mounting a wave, finding your position, then holding and adjusting that position as the water flows under you, supporting you with its force.

Let’s take a look at the anatomy of a wave: 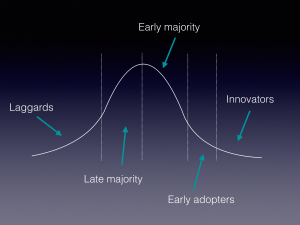 Okay, so this isn’t the type of wave you’ll see at the beach – only the one you’ll find in the oceans of business. There, one adoption curve after another ripples through time: first the innovators begin the momentum, then the early adopters take up the flow. Next the early majority makes it their own, after which it moves into the late majority camp, and lastly the laggards begrudgingly accept it.

We all have our preference: some of us are itchy and are stirred to push onto something no one else has tried yet. Others would like to see at least a few go ahead before they follow. Then there are those who need to see it proved before they’ll make their move, followed by those who finally catch the drift, and in the back, those who only come because someone made them.

There’s a business model for each segment of this wave: a customer market, with a profitable value proposition that appeals to that market. For example, on the one end you may find brain wave language interpreters, and on the other, typewriter manufacturers. Neither of them are better or worse business models per se; just each of them different, with a different set of appropriate strategies. Just like surfers can position their board on the uptake of the wave, or the back draft of the wave, we can position our businesses in the innovator/early adopter part of the wave, or back in the late majority/laggard part of the wave. Get both those business owners to sit down at the same table, however, and you’re gonna find two very different ways of thinking, and two very different ways of conducting business. Again, neither one is wrong per se: each has simply learned what techniques work for their part of the wave.

But move your position on that wave – now we’re talking struggle. Anybody feel that struggle? I know I do. The struggle comes from two sources: your current customers signed on to a particular value proposition. They understandably aren’t gonna just change simply because you are. And frankly, it may not be good for them either. The other source of struggle: you. When you move your position on the wave, you’re having to learn new ways of thinking and new ways of doing things, not to mention actually doing them – straining your way to that new spot.

*Not* moving your position on the wave – here’s where we’re usually most comfortable. “It’s working, and if it ain’t broke, don’t fix it.” Only catch is, the wave doesn’t work that way: time passes, and the wave moves. It’s one thing to stay in a certain part of the wave, it’s entirely another stay with a certain value proposition. As I alluded to in Time To Innovate, value is dynamic over time: the “values” that are even possible evolve, the “values” people are aware of evolve, the relative worth to other “values” evolves, and each person’s perception of all three evolve. Over time, late majority becomes laggard. And early adopter becomes early majority. Etc. Depending on the industry, those waves can come at different rates of frequency – some longer than a lifetime, and some as short as a couple of years. So you gotta decide your strategy: is your business committed to the product, or the wave position?

Those committed to the wave position will need to become comfortable with changing value propositions. (If we’re good, it can even become part of our strategy and process – but that’s for another blog post.) For some in our industry, we may be moving from laggard to late majority (can you say: those who adopted e-filing last year?). For others, we may be moving from late majority to early adopter (I’d say a shift from desktop accounting to the cloud qualifies here). In my opinion, it’s very hard to jump the curve: i.e. to slide too many positions forward on the wave. It’s rare and hard to do without a discontinuous business event (read: start entirely new entity). A strategy I think that could be very effective is to straddle the early majority/early adopter part of the curve: the goal here is to have multiple linked value propositions in play, where you’re investing and developing something new, using margins from the something proved. In this way, you can continue to cycle the water flow, almost like one of those stationary swimming pools. 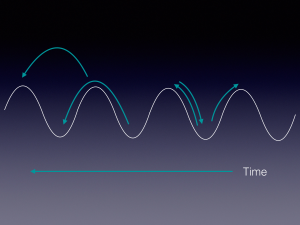 (Side note 1: Those in the innovator phase are actually creating the wave, which is why those further back on the wave can find themselves out of wave power if it’s been redirected. E.g., Apple vs. RIM)

(Side note 2: Those who commit to the product rather the wave position also have to deal with changing their value proposition, just in a different way. As their product slips back over the wave through time, different strategies will need to be adapted to keep producing the same result. E.g., CPAs doing simple 1040 tax preparation are finding they’re now in a different landscape, and the old methods are not going to carry them like they used to.)

There’s more that can be said, of course, but I’m hoping the above helps paint a picture which equips you to be more conscious of your own strategy, and what type of surfer you want to be. Hang-ten fellow CPAs — let’s go catch some waves! 🙂

Adrian G. Simmons is a CPA innovating ways to put money in its place. After working as an auditor out of college for KPMG, he joined his father in public practice in 2002, and now acts as the Chief Creative Designer there. With the team, he looks for ways to help their customers become financially strong, so that they can focus on what truly matters in life. Adrian likes tech, uses a fountain pen, successfully attempted a half-marathon (and may try another)  , and prefers dark over milk chocolate.